Probably the best argument in favor of the internet bringing people closer together is the fact it is a global phenomenon. People from all over the world are online, sharing content and using the same websites. This gives both individuals and businesses more opportunities to extend their networks and reach out to people they may otherwise never meet. 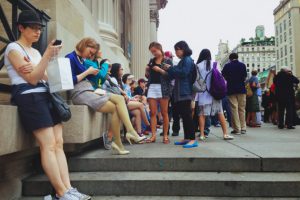 This is best seen in the growth of social networks, which are massively popular. Facebook is probably the best example of this, which has over 500 million active users and is still growing. People often use the website to connect with friends and contacts, such as people they knew at school but have since lost touch with.

The Internet doesn’t bring us closer together

This can perhaps be best seen through the idea that although people are now more able to get in touch with others than ever before, the quality of communication you experience with someone through a social networking site will never be of the same standard as if you were talking face to face.

There is some merit in this – when you consider that many people who work in the same office now frequently email each other instead of going to speak to each other directly When you consider that some websites are blocked in countries such as China, North Korea massively restricts internet use and the Egyptian government recently switched off the internet, it can also be argued that there is a power to be found in controlling the internet. Therefore, even if the internet works to bring its users closer together, it pushes those who aren’t online further towards the margins.